This morning, NPR revealed that as a law professor, Supreme Court nominee Judge Neil Gorsuch told students companies “should ask women seeking jobs about their plans for having children and implied that women manipulate companies starting in the interview stage to extract maternity benefits.” Federal law prohibits companies from discriminating in hiring based on pregnancy or family planning.

When Gorsuch’s nomination was announced in January, John Adams, candidate for the GOP’s nomination for Attorney General, tweeted, 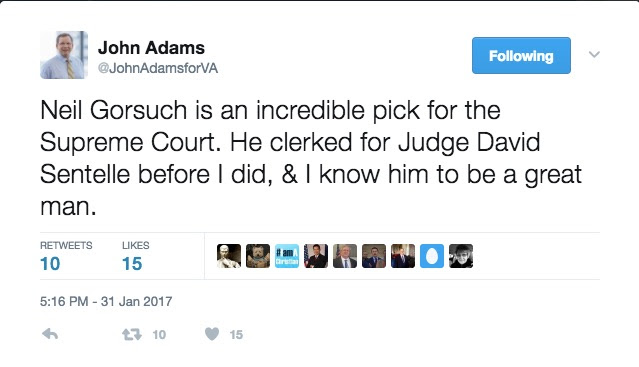 “Women are the sole or primary breadwinner in close to half of American families,” said Progress Virginia executive director Anna Scholl. “These sort of retro attitudes about women in the workforce don’t just hurt female employees—they damage the economic stability of many families while sending a message to our daughters that they’re just not quite equal. Virginia’s Attorney General simply cannot endorse discriminating against working women who also want to start a family. Where will John Adams draw the line when it comes to bosses sticking their noses in women’s private family planning decisions?”

Adam’s understanding of “liberty” when it comes to women in the workforce is a little more complicated. Adams argued on behalf of allowing employers to make decisions about birth control access for employees in theHobby Lobby case. The court’s decision in that case allows employers to impose their religious beliefs on employees and deny access to some forms of birth control.